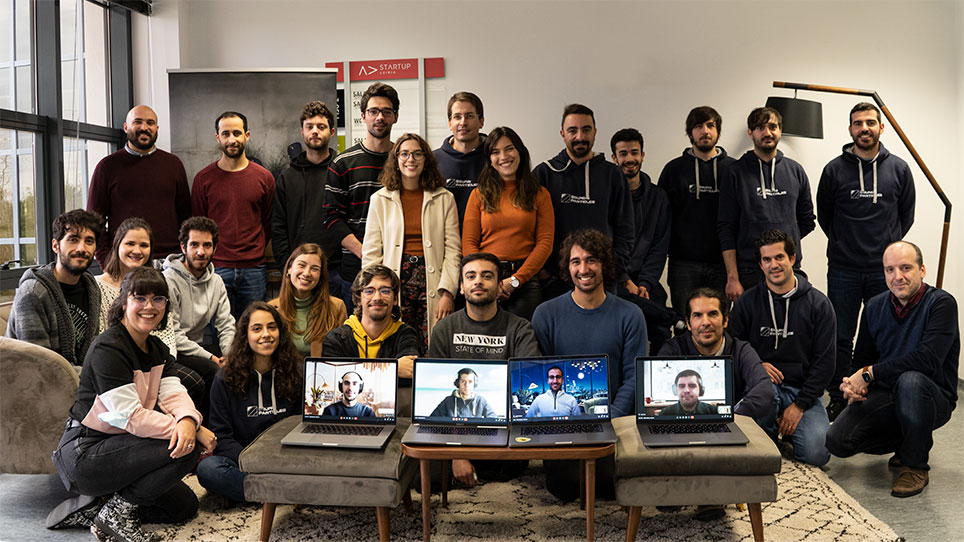 Sound Particles creates audio software that brings the power of computer graphics to the sound world, allowing sound professionals to create breathtaking sounds that simply would not be possible to create in any other way. Based in Leiria (Portugal) and founded by Nuno Fonseca, a former university professor, Sound Particles counts on a team of 16 people (15 in Portugal and 1 in the UK).

Sound Particles’ unique software is used in all major Hollywood studios and top videogame companies, in productions like “Game of Thrones”, “Maleficent 2”, “Aquaman”, “Ready Player One”, among many others.

Around 2002, a Portuguese university professor named Nuno Fonseca noticed that the most interesting visual effects seen on movies were using particle systems, a Computer Graphics technique that creates thousands or even millions of small objects to simulate fire, rain, sandstorms, dust, smoke, and explosions. He thought it would be interesting to apply the same concept to sound, generating thousands of sounds that together would create fantastic soundscapes. That was only an idea... However, a decade later, in 2012, after finishing his PhD, he started developing Sound Particles.

In 2014, with only a prototype, he contacted some Hollywood studios and within 6 months, he gave presentations in studios like Skywalker Sound, Warner Bros, Universal, Fox, Paramount, Pinewood, and later on in Sony Pictures, Pixar, and Disney. By the end of 2015 he launched the first version of Sound Particles, and in November 2016 Sound Particles, the company, became a reality. 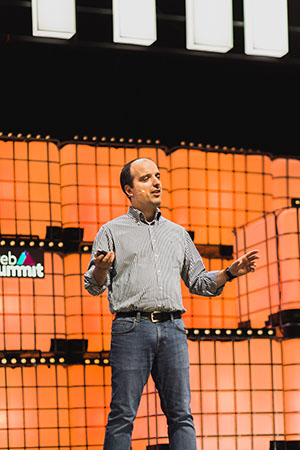 Nuno Fonseca at WebSummit 2019, speaking in the main stage.

Sound Particles company was founded on November 2016 by Nuno Fonseca, a Portuguese university professor that was teaching Computer Science at the Polytechnic Institute of Leiria, and Music Technology at the Music School of Lisbon. With a PhD in Computer Audio (singing voice resynthesis), Nuno Fonseca is the author of the book “Introduction to Sound Engineering” (Introdução à Engenharia de Som), co-author of the book “iOS Development” (Desenvolvimento em iOS), and author of more than 20 papers on audio research topics.

Sound Particles was not his first audio software project. Starting in 2001, Nuno Fonseca created a text-to-sing software in which a virtual symphonic choir is able to sing the text written by musicians, resulting in “Voices of the Apocalypse Utility” and “WordBuilder”, text-to-sing tools that are part of EASTWEST current choir products, including “EW/QL Symphonic Choirs” and “Hollywood Choirs”, and used by many Hollywood composers.

Sound Particles, the software company that has been changing the paradigm of 3D audio software, is introducing a different approach to panning with the release of a new plugin – the Energy Panner.

Epic Games, the leading videogame company famous for the game Fortnite and the game engine Unreal, has offered Sound Particles a grant of $50 000 as part of their Epic MegaGrant program.

Sound Particles, well known for their 3D audio software, just released a free eBook entitled “All You Need To Know About 3D Audio”, with the goal of helping professionals around the world to transition into the immersive audio field.

Air was originally a part of the "Doppler + Air" audio plugin bundle, nominated for "Outstanding Product" by the Cinema Audio Society, and it is now available for individual purchase.

The sound design software being used on all major Hollywood studios and top videogame companies adds new functionality with its 2.1 release.